RBBs may look inflatable, but they are not!

At first sight, RBBs (“Rigid Buoyancy Boats”) share several similarities with RHIBs (“Rigid Hull Inflatable Boats”), most notably their curved hull made of pontoons that look a lot like the pressurized tubes of RHIBs or inflatable boats. But those similarities only concern the external hull shape. The actual design principles of RBB are very different from those of RHIBs. 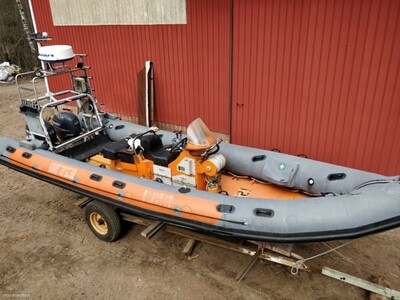 The traditional inflatable boats from which they were derived get their structural stability from their pressurized tubes. If those tubes lose their inner pressure, the boat loses its shape and seaworthiness, it basically collapses.

In an “evolutionary” development aimed at overcoming the typical shortcomings of inflatable boats (namely a general lack in structural stability/seaworthiness and the ever-present risk of catastrophic failure due to damaged tubes), RHIBs were equipped with an additional rigid bottom/hull, in order to re-enforce and protect the inflated tubes and the boat’s bottom. Both buoyancy and structural stability of RHIBs are therefore partly provided by the re-enforced hull of the boat.

But still their pressurized tubes remain as a provider of buoyancy and stability, just like the inflatable boats on which their design is based. 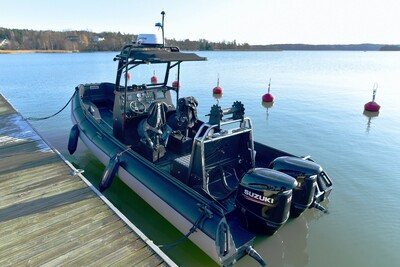 Rigid Buoyancy Boats (“RBBs”), on the other hand, are designed as self-buoyant, made not from flexible, “rubber-like” materials but from more rigid sheet materials like HDPE or HMWPE (“High Molecular Weight Polyethylene”, also known as PE500).

The entire boat is structurally stable and buoyant, with buoyancy provided both by the hull itself and the boat’s rigid pontoons. Unlike the tubes of RHIBs, these pontoons (also made from HMWPE, just like the entire hull of the boat) don’t need to be pressurized in order to keep their shape and provide additional buoyancy and structural stability to the boat. As an added benefit, their stability and the fact that they are not inflated allows the pontoons to be designed with a D-shaped cross-section, with the curved part of the “D” towards the outside and the flat part towards the inside of the boat, leading to more floorspace on the inside of the boat.

While aluminium does have its place in boat building (especially when aluminium-magnesium alloys with higher resistance against galvanic corrosion are used), it’s generally better suited for conventional boat construction and “fair-weather boating”, where more consideration can be given to “treating the boat well”.

For more information on suitable applications for different materials, like HMWPE, GRP, or Aluminium, please refer to our detailed comparison.

A closer look at the advantages of RBBs vs. RHIBs

So even though they look superficially similar, the fundamental design differences between RBBs and RHIBs have important consequences under real-life conditions.

One advantage of RBBs over RHIBs that can be very relevant in day-to-day operations isn't immediately visible when looking at the boat from the outside, but it becomes obvious right away when stepping onto the deck: RBBs offer much more usable deckspace when compared to RHIBs of the same outer dimensions.
An RBB's pontoons do not need to be inflated in order to keep their shape. Their inner side can therefore be built flat, resulting in a pontoon cross section resembling a "D". For this reason, the deckspace of an RBB is typically 50 to 60 cm wider than that of an RHIB with similar outer dimensions, freeing several square meters of extra deckspace even on the smaller types of RBBs.

Plus, the inflatable hulls of RHIBs are constantly at risk of being pierced or ruptured upon impact, no matter how resilient the material they are made of. When in fact damaged, they lose pressure quickly, and the boat loses stability, buoyancy and all seaworthiness.

Compared to RHIBs, with RBBs the risk of catastrophic failure basically disappears, based on the RBBs’ design principle. Not only are their hulls and pontoons much more impact-resistant than an RHIB’s inflatable tubes (especially when made from HMWPE, which is much more resilient than even the sturdiest tube material), but even if an RBB’s pontoons should get damaged, they would not collapse like deflated tubes, but keep their shape and buoyancy, just as the RBB would keep its overall stability and buoyancy. Boats can therefore be constructed in a way that they would not sink even if shot by a rifle. 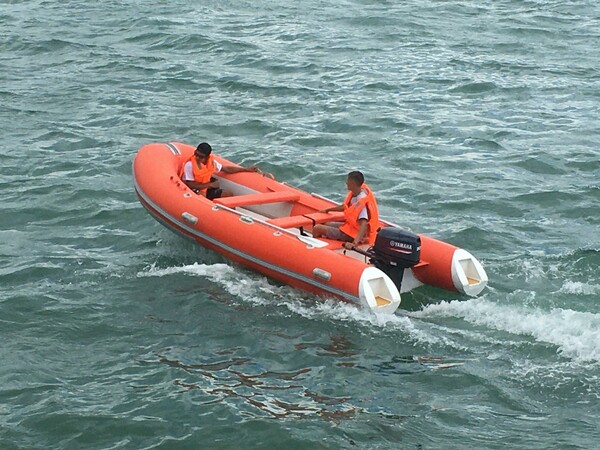 Reduced deckspace on a RHIB due to large inflated pontoons 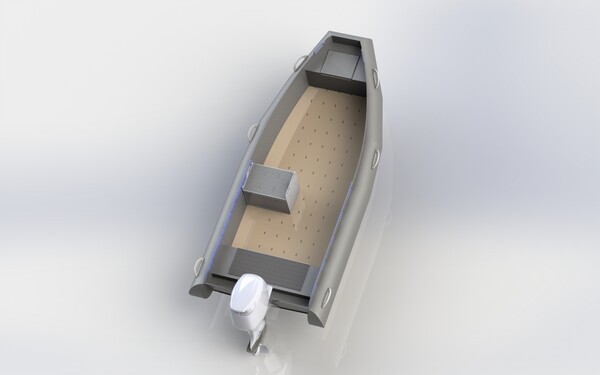 More space on an RBB thanks to D-shaped pontoons 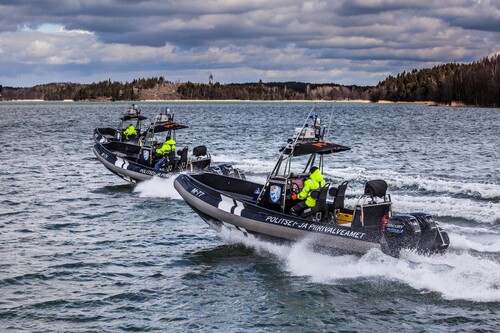 For rough environments, arctic conditions, frequent rock contact and in general for critical deployments where the mission is more important than avoiding risk of damage for the boat (rescue or military missions, police work,…) RBBs are better suited for the task than RHIBs.

While catastrophic failure of the boat due to tube damage is always a very real possibility for RHIBs, RBBs made of HMWPE combine a much more resilient, practically “unsinkable” design with an almost indestructible material, making them an ideal choice for heavy-duty boats intended for challenging situations and life-or-death missions, where they don’t need to be handled with as much care as conventional aluminium boats would.