Our boat production is located in the town of Parainen, Finland. The office and design shop are in Helsinki. The company is owned by investors in Sweden and Finland.

Arctic Boats is a trade name under Arctic Airboats Oy Ltd. In 2007, Arctic started making airboats in aluminium and polyethylene (see www.airboats.fi). As we discovered that airboats made of polyethylene are strong enough to operate on ice, broken ice, snow and water, we wanted to make robust boats from the same material.

We have, so far, supplied Search and Rescue boats to Finland, Germany, Sweden and Greece. In addition to this, we have made patrol boats to Estonia.

Visit us on Vimeo

Finland is situated at the same latitude as Alaska with arctic climate in the winter. However the finnish summers are as warm as in central Europe, so the difference in temperature between summer and winter is big. Although the Finns should to be used to frozen lakes and sea, over a hundred people drown every year due to going through thin ice. This is in particular a problem among sport fishermen and people driving their snowmobiles on weak ice. 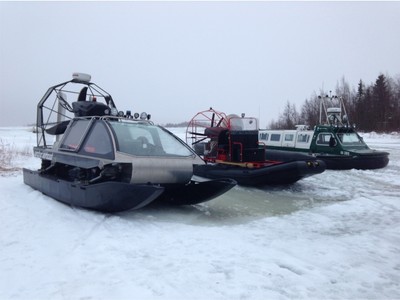 or "hydrokopters" as they are called here have been used in the Nordic countries ever since they were invented (in Canada in the 1930s). A great number of of people living on islands around the finnish and swedish coast are dependent on some mode of transportation that can cross both thin ice and open water. Hovercraft have vulnerable skirts that tend to get torn by the ice. This is why airboats are common in the Nordic countries.

Even with the popularity of airboats, there has been rather limited production of airboats in the area. In 2005 Henrik Paersch started developing an airboat using american airboats as a model. This type of airboat was, however, not a good solution for the Arctic conditions as the flat bottom picked up every little bump on the ice and was hard on the structures and passengers. So with the collaboration of some engineering students, he instead constructed an airboat with air suspended pontoons.

Later it became apparent that Polyethylene (HMWPE Polymer) was a more suitable material than aluminium thanks to its flexibility. Now all the airboat models do have a PE hull that is both flexible, tough and has a very small friction on ice and snow.

FROM THE EXPERIENCES FROM BUILDING AIRBOATS IN POLYETHYLENE CAME THE IDEA OF MAKING BOATS IN THE SAME MANNER. If the material can take the tremendous G-forces of the ice, it must be able to withstand the beating of waves. As it turned out, HMWPE is a fantastic material for boatbuilding. The boats can hit rocks literally without any damage, they are environment friendly, recyclable, and easy to repair.

Contact us for sales, further details and custom orders.